French Parliamentarians working for the TPNW

by admin
in Nuclear Power

The French government currently rejects the Treaty on the Prohibition of Nuclear Weapons (TPNW). However, parliamentarians in favour of this new international norm have multiplied initiatives in recent months with the advocacy work done by our partners ICAN France.

The first major initiative in 2022 was to organize a conference in the Senate, ahead (4 March) of the First Meeting of States Parties to the Treaty on the Prohibition of Nuclear Weapons. Ambassador Kmentt, experts from the International Committee of the Red Cross and Red Crescent, French Red Cross, ICAN Norway and ICAN Germany were in attendance. The concrete outcome of this conference was, firstly, to announce the participation of two parliamentarians (Mounir Satouri MEP, member of the Foreign Affairs Committee and Pierre Laurent Senator, Vice-Chairman of the Foreign Affairs, Defence and Armed Forces Committee) at the first meeting of parliamentarians organised by ICAN in Vienna (June 21) and, secondly, it led to the publication of an Oped (Le Monde, 17 June), signed by 56 parliamentarians (in favour or not of the TPNW), requesting France’s participation at the 1MSP as an Observering State.

Based on the parliamentary declaration, adopted at the ICAN Parliamentarian Conference in Vienna it was decided between ICAN France and French MP’s (Mounir Satouri and Pierre Laurent) to launch a new strong initiative in France.

Thus, on 26 October 2022, at the National Assembly, Jean-Paul Lecoq MP, Vice-Chairman of the Foreign Affairs Committee, MEP Mounir Satouri, Senator Pierre Laurent and Jean-Marie Collin, expert and spokesperson of ICAN France, announced the launch of an Circle of parliamentarians “to initiate reflection on military nuclear issues and in particular on the Nuclear Weapons Ban Treaty”. This is the first time such a parliamentary initiative has been taken in a nuclear weapon state.

In his speech, Jean-Marie Collin explained the state of play of the TPNW, the progress made at the 1MSP, the TPNW’s complementarity with other disarmament treaties and called parliamentarians from all political groups, who are concerned about nuclear weapons, to join this circle.

This objective of this Circle is “to provide input for new thinking and to interact with those involved on nuclear disarmament and non-proliferation issues and notably on the Treaty on the Prohibition of Nuclear Weapons” and to work openly with ICAN. One of the focus areas for the cycle will be France’s participation at the second meeting of the States Parties (2MSP) as an observer, investigating the consequences of the 210 French nuclear tests in Algeria and Polynesia, including the subject of nuclear waste buried in the Algerian sands, and the need for environmental remediation in these areas. 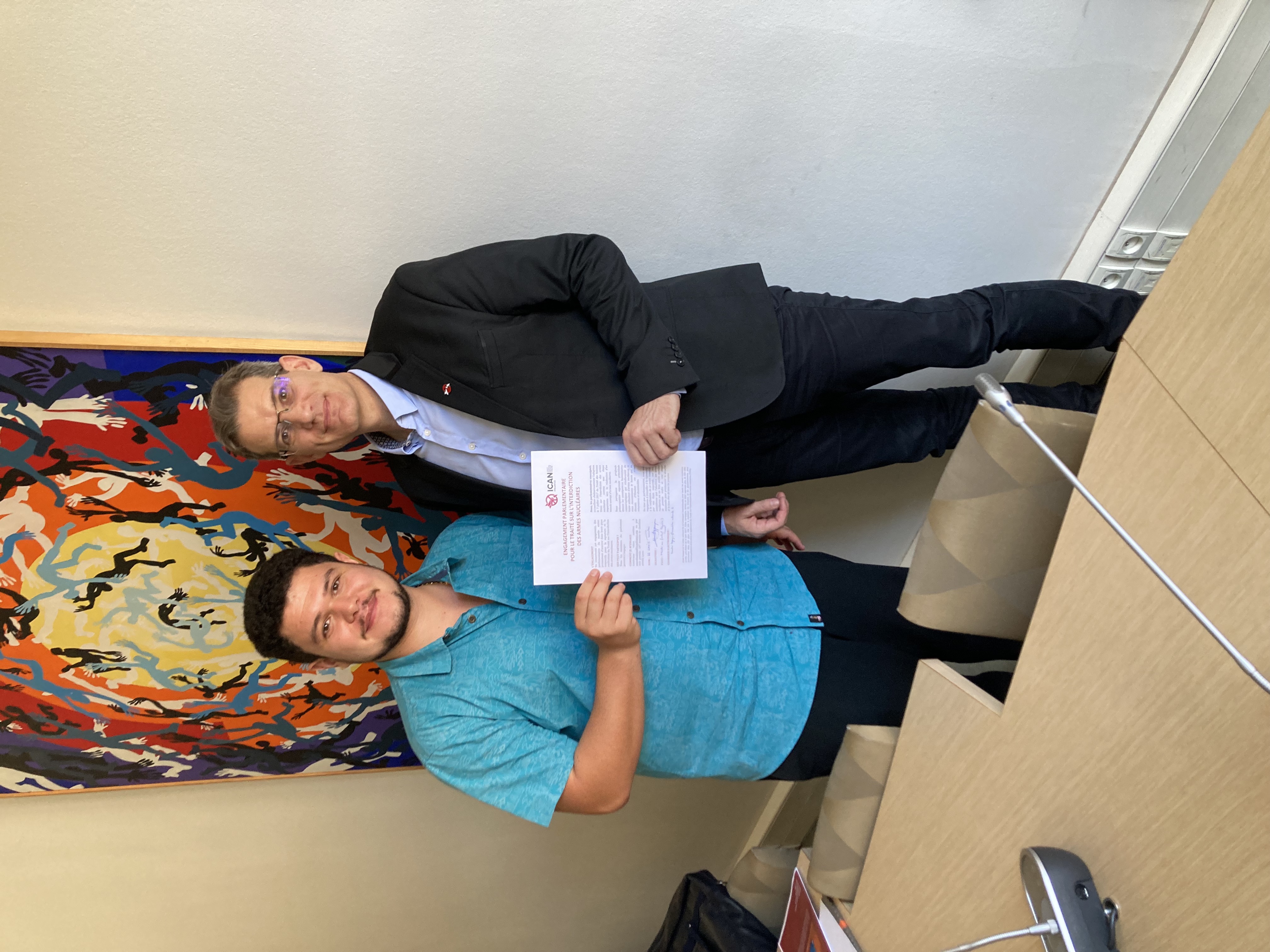 During the launch, the MP’s Hubert Julien-Laferrière and Tematai Le Gayic (from Polynesia, Photo) signed the ICAN Parliamentary Pledge. In total, 32 French parliamentarians have now signed the pledge.

The advocacy process may seem long and complex, but it works, because the TPNW is well alive in France!

Why Is There More Media Talk About Using Nuclear Weapons Than About Banning Them? « nuclear-news

This Year’s Danger Season Is Over, but Risks to Farmworkers Remain